After the Flinders Ranges Workshop we returned to Adelaide, picked up our truck from storage and headed south to Robe, a small fishing village. After two weeks of perfect weather for the workshop, we drove south into howling wind and rain.

The coastline around Robe is rugged and isolated. We had a couple of days in Robe then turned east to follow the Great Ocean Road along the Victorian coast. By now the rain had eased but the wind was still howling in from Antarctica – Chilly, but spectacular.

Always a great place to camp along the Swampy Plains River at Geehi. We were surprised at the number of rabbits (and foxes) – the calicivirus seems to have no effect here.

From Geehi we drove up over the mountains, Past Thredbo and on to the Murrumbidgee River on the Long Plain Road. We often camp here when we are in the High Country, but were amazed to find the area coated thickly in white next morning. Spectacular, but freezing cold!

A fisherman dropped in around 9am on his way to Tantangra Dam. He said the temperature readout in his Landcruiser was saying -5, so I dont know what it got down to overnight. Our water pipes were frozen, the hot water heater had frozen and burst and, in spite of filling with what we thought was winter diesel, couldn’t start the truck till after 10am.

Leaving the snowy, we drove up to the Warrumbungle Mountains to spend a couple of days. This time of year encountering snakes is unusual but this big Red Bellied Black snake decided to cross the path right in front of us. We left him to crawl off into the bush.

We left Arkaroola and headed down to Adelaide, exploring Wilpena, the southern Flinders and Burra, on the way. Our truck was parked in secure parking for the two weeks of the workshop. We spent a night in Adelaide, then we joined the painting group and travelled back up to Wilpena Pound Resort by coach for our first 5 days of the workshop.

The Flinders Ranges are a great place to paint – interesting buildings, spectacular gorges and a backdrop of magnificent purple mountains.

This old door has been patched and repaired over the years, keeping the blacksmiths cottage secure for over a hundred years. 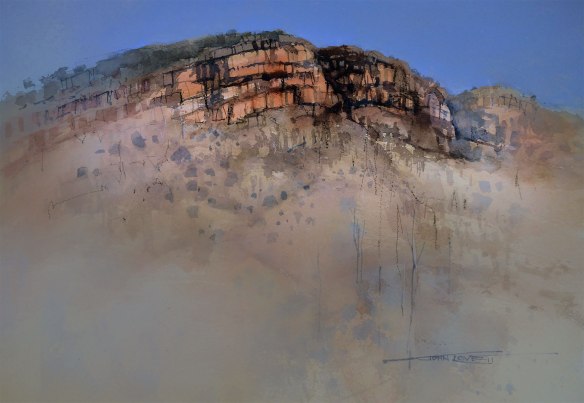 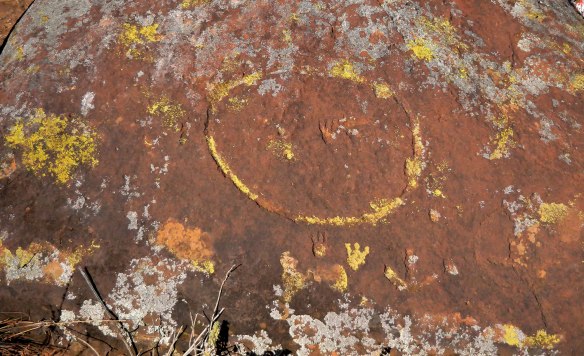 We had two great indigenous guides to show us around the Brachina Gorge area. They took us to see these ancient rock engravings with all sorts of interesting details.

Leaving The Flinders, we moved on down to Burra, a beautiful little town with magnificent stone buildings built in the boom days of the towns copper mine in the 1800’s. We spent a few days in Burra exploring the area and painting.

South Australia has a lot of old abandoned railway stations, some with old rolling stock, some with wheat silos and most of them built beautifully from local stone 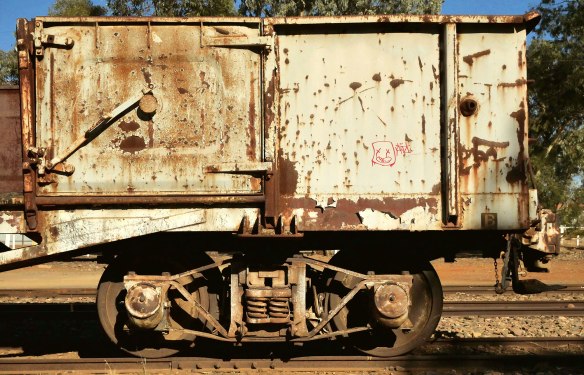 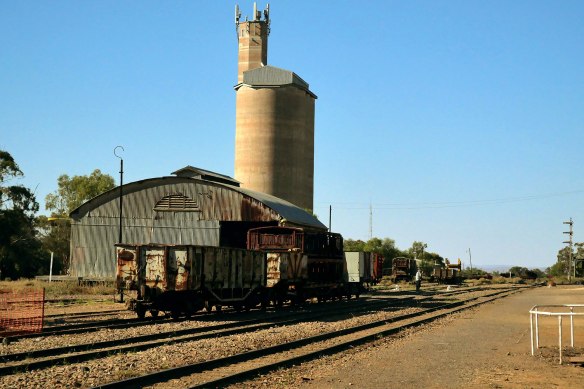 One of our group has explored all the old abandoned stations in the lower Finders. He got permission from the owners of this beautiful old station for us to visit. 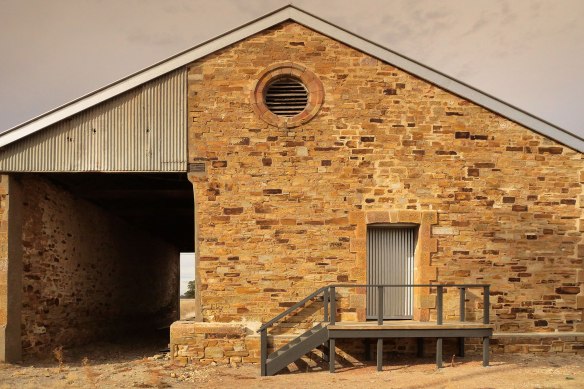 We spent a morning painting the old Farrell Flat Station.

Skillogalee Vineyard made a good painting destination. We sampled their wines, had a fabulous meal and painted in the vineyard garden – What a great day.

Lunch on the Skillogalee verandah.

Our last couple of days were spent in Hahndorf in the Adelaide hills. We visited The Cedars – the home and studio of Hans Heysen. 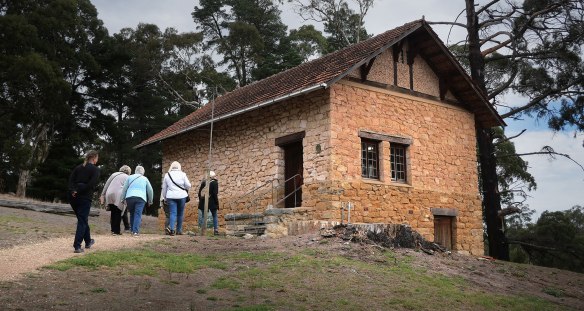 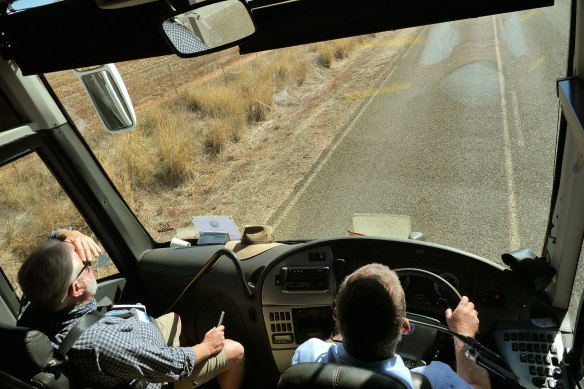 We were lucky to have “The Two Marks” on board as we travelled around South Australia. Mark One , the driver, had a terrific knowledge of the area and kept us entertained and informed with some great stories. Mark Two,  a local watercolourist and long time traveller through the region led us to some great painting locations we would have otherwise missed.

The passing vista of old abandoned buildings, big skies and bare rolling hills is unique to South Australia and is something that keeps drawing us back to this part of the country. 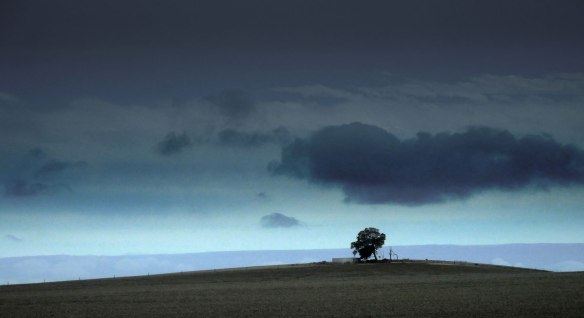 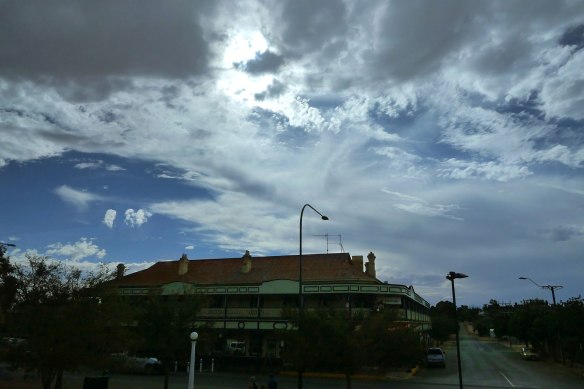 After 12 months of Covid restrictions it sure is a good feeling to load up our truck and head out west again. Our plan is to head west through Queensland and cross the, now open, border into South Australia around Innamincka. From there we will follow Strzelecki Creek along the Old Strzelecki Track, stopping at some of the waterholes mentioned by John Conrick in his 1870 journey to find a route to drive cattle from Western Queensland to Adelaide.

Old Dynevor Downs shearing shed. Every time we drive past I stop and take a photo. Over the last 30 odd years we have seen it slowly deteriorate. Wild dogs have virtually shut down the wool industry in Western Queensland.

An unusual site – The Wilson river at Noccundra brim full of water.

As we head out through Western Queensland it is great to see all the creeks and waterholes full from recent rain.

The normally dry desert country is green and full of wild flowers at the moment.

The Old Strzelecki Track could better be described as the Old Strzelecki River. Kilometres of the track were under water so we had to use side tracks most of the way. The abundance of water meant that birdlife was scattered far and wide, unlike in dry times when the odd small waterhole attracted hundreds of birds. We managed to find a couple of Conrick’s waterholes but the condition of the track made it difficult.

This ever changing sculpture made from camel bones and accumulated junk marks the end of the Strzelecki Track and the Northern approach to the Flinders Ranges.

North Mulga Station sits on a lonely stretch of land at the Southern end of the Strzelecki.

Dogs are trapped and poisoned in an attempt to give the farmers a chance to raise stock on these huge properties.

A pair of Brolgas heading to a water hole at sunset

Corellas make a home in a giant River Red Gum

Approaching the Arkaroola turn off in the Northern Flinders.

Back into harsh, dry country around Arkaroola

The dark nights and clear air around Arkaroola are perfect for astronomy. There are a couple of large telescopes on the property.

The small, endangered Yellow Footed Rock Wallaby lives in the hills around the Flinders Ranges.

Feral Goats also compete for grass and water in the area.

Nankeen Kestrel on an Arkaroola stump

A happy parrot perched in the morning sun

Leaving Arkaroola we headed north along the Strzelecki track. It skirts the Strzelecki, Simpson and Sturt’s Stony Deserts. Most of the track was in good condition, but very dusty, which didn’t bother us much, since there was no traffic.

Santos manage to suck oil out of all this dry sand.

In 2010 this rig and all the others in the lower Strzelecki sat in 2 meters of water for the best part of 12 months. It’s hard to imagine that volume of water spread out over this incredibly flat land.

These cattle must live on dirt and rocks – there doesn’t seem to be anything else to eat.

We spent a night at Innaminka on Coopers Creek, then wound our way over a slow track full of bad corrugations, washouts and bull dust. This took us to Coongie Lakes – a strange sight after winding over desert sandhills. The lake is massive and supports all sorts of birdlife 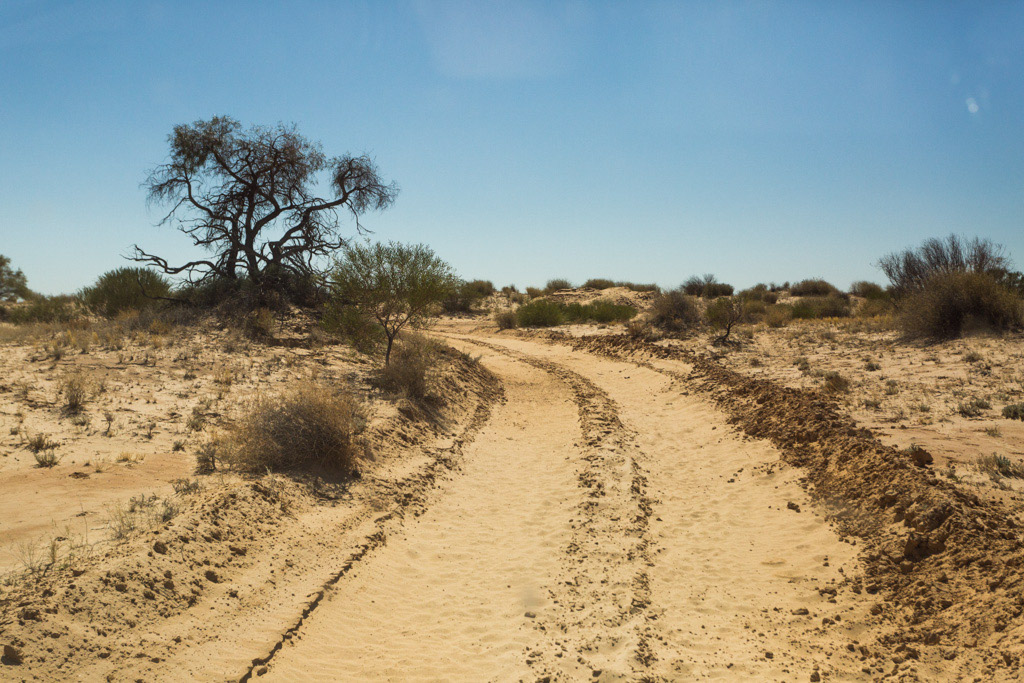 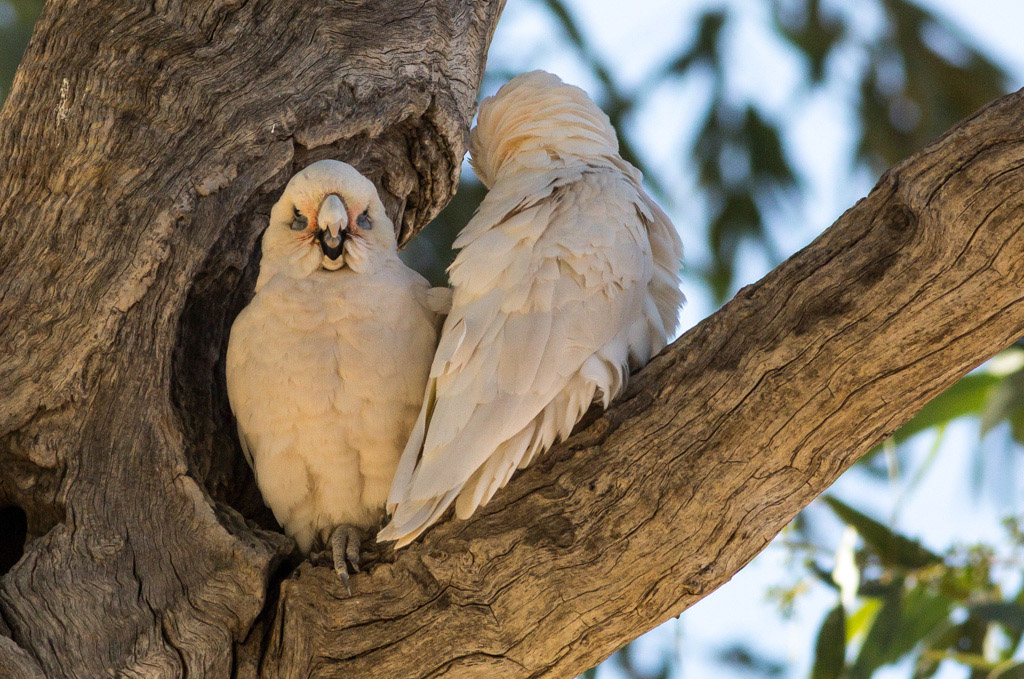 Dingos howled most nights but they are very cautious and hard to see. I managed to get a photo of this guy early one morning.

These are some of the best examples of bush architecture we encountered along the way.

Windorah – Once the old court house, now a comfortable abode

Dynevor Downs shearing shed – like much of western Queensland wild dogs have forced a change from sheep to cattle, so this once mighty shed is in decay.

Beltana SA – What cant you do with corrugated iron?

Warrego Hwy – This old place has been added to and extended over the years – sadly, now abandoned and slowly disintegrating.

From Maree we headed south into the Flinders Ranges via the ruins of Farina and the soon to be abandoned town of Leigh Creek.
The Flinders Ranges contain some of Australia’s most spectacular landscape. We zig zagged our way from the south, back and forth up through the ranges until we reached Arkaroola in the north.

The country surrounding the ranges is flat, dry and vast. 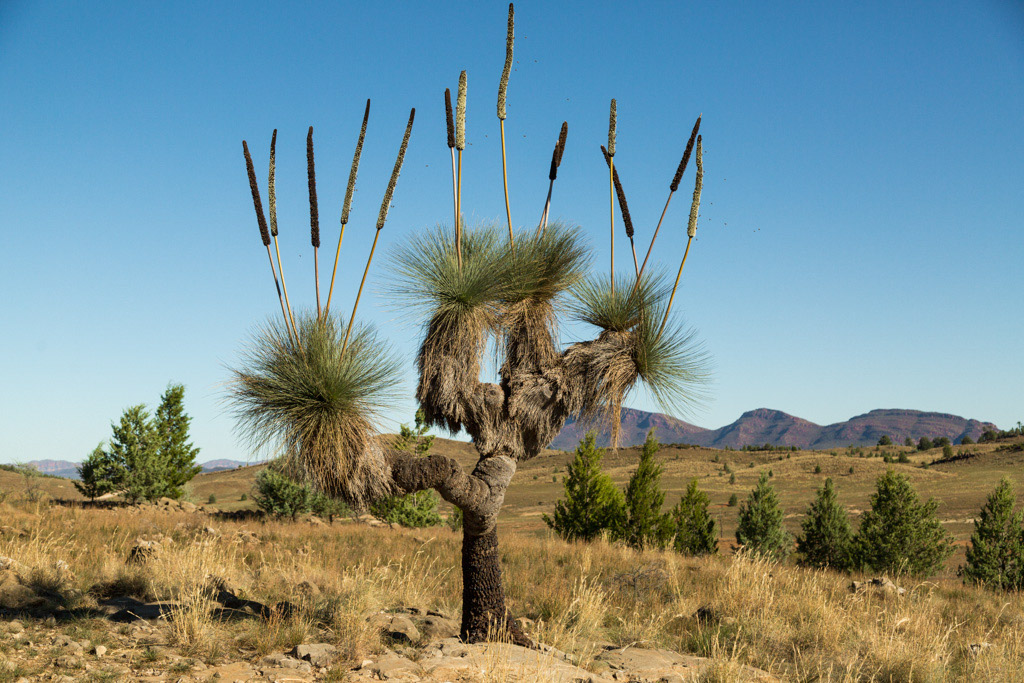 This distorted grass tree looks almost as old as the country surrounding it.

Camped in a ring of ancient mountains

Walking in these ranges is compelling. You can’t help walking to the top of the next hill or exploring the next stony outcrop. 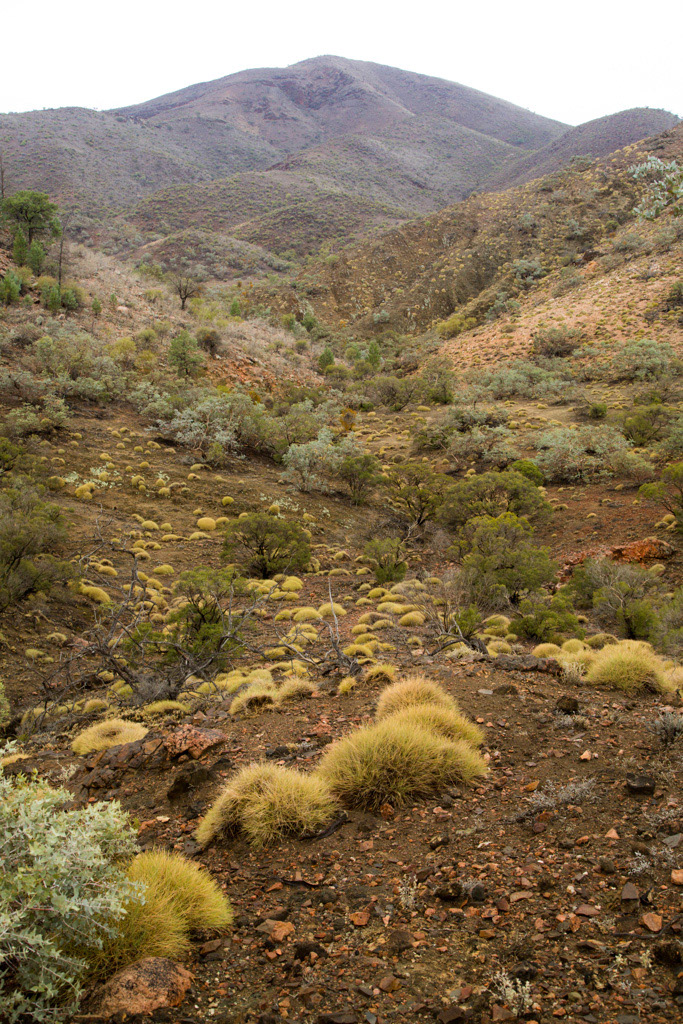 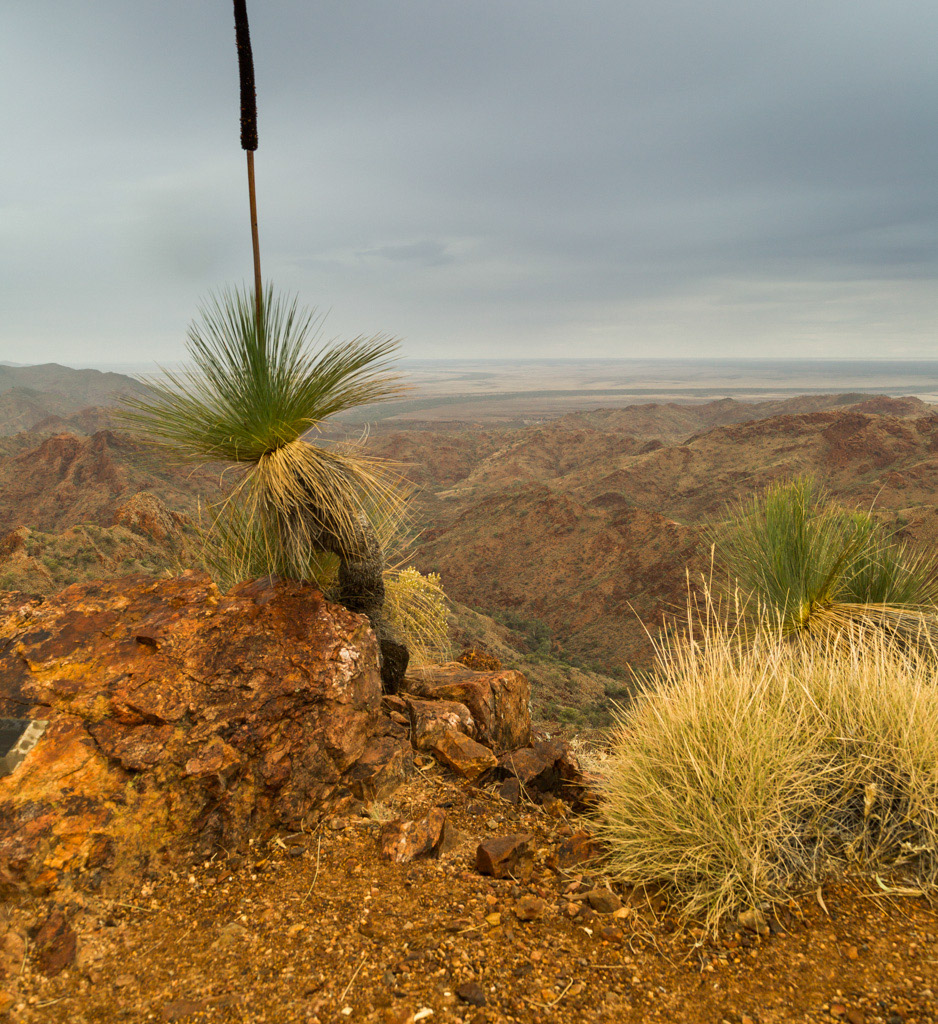 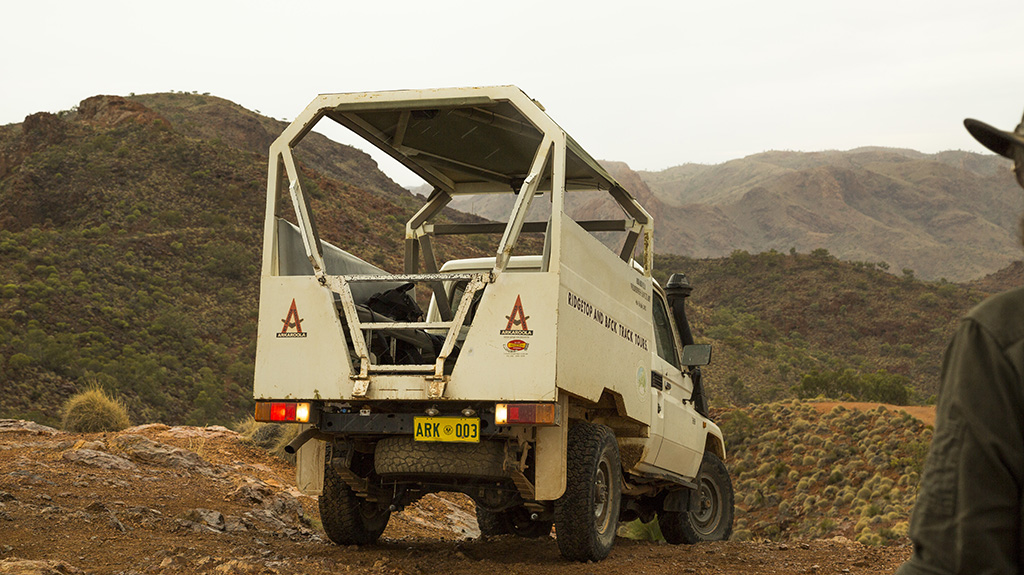 The Arkaroola Ridgetop Tour is something not to be missed. Almost 5 hours exploring some of the wildest four wheel drive tracks and gazing over the most spectacular views I have ever seen. These landcruisers get just 2000 kilometers from a set of tyres! 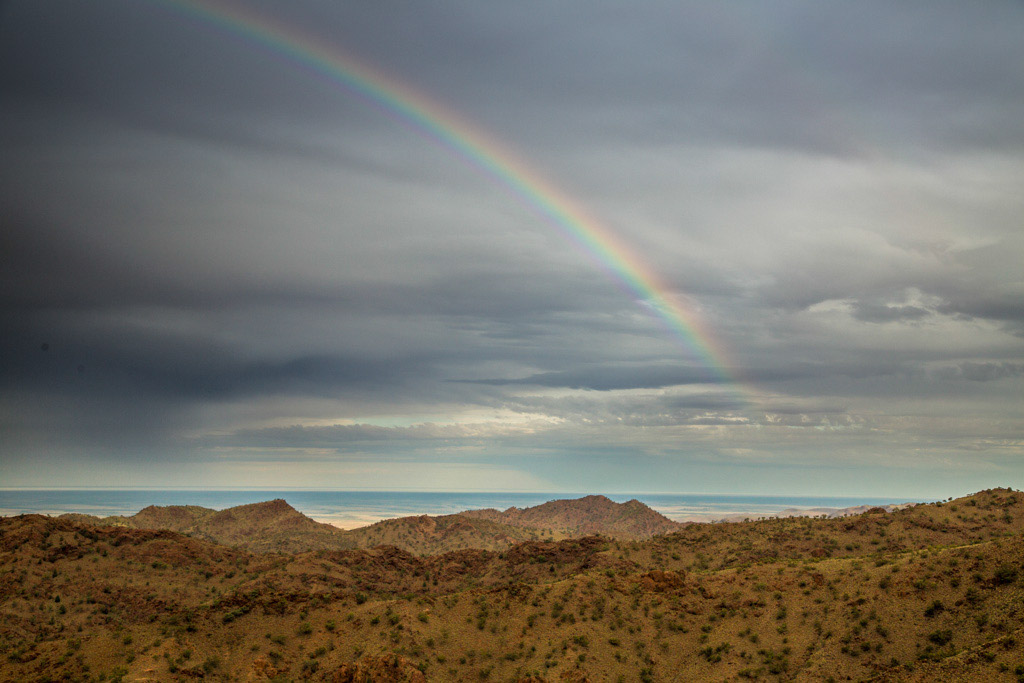 The Yellow Footed Rock Wallaby makes it’s home in some of the remote parts of Arkaroola. 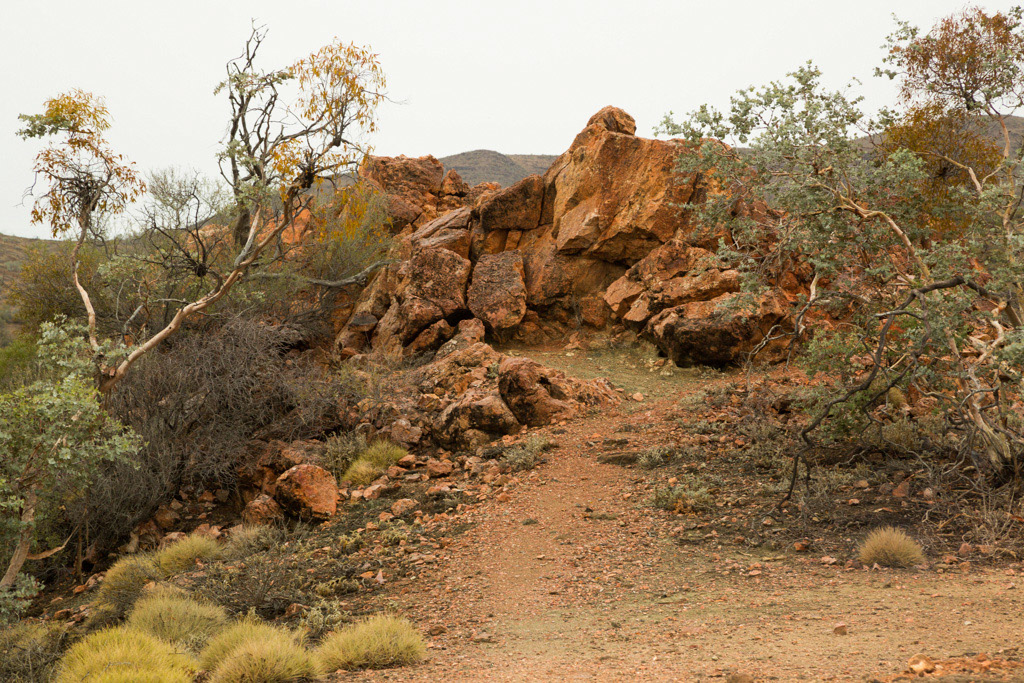 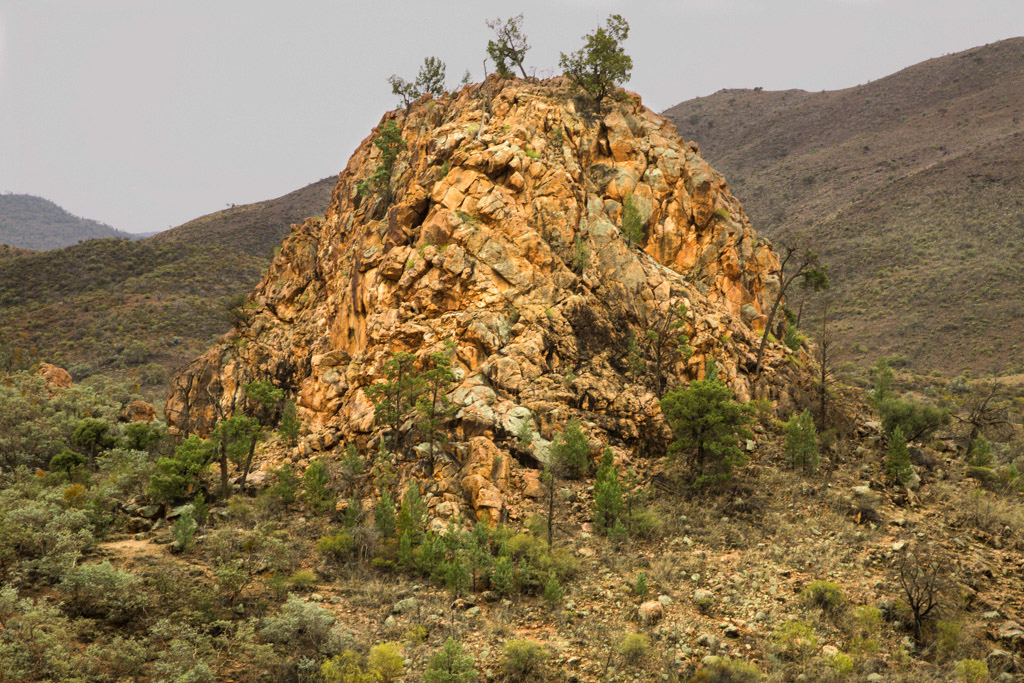 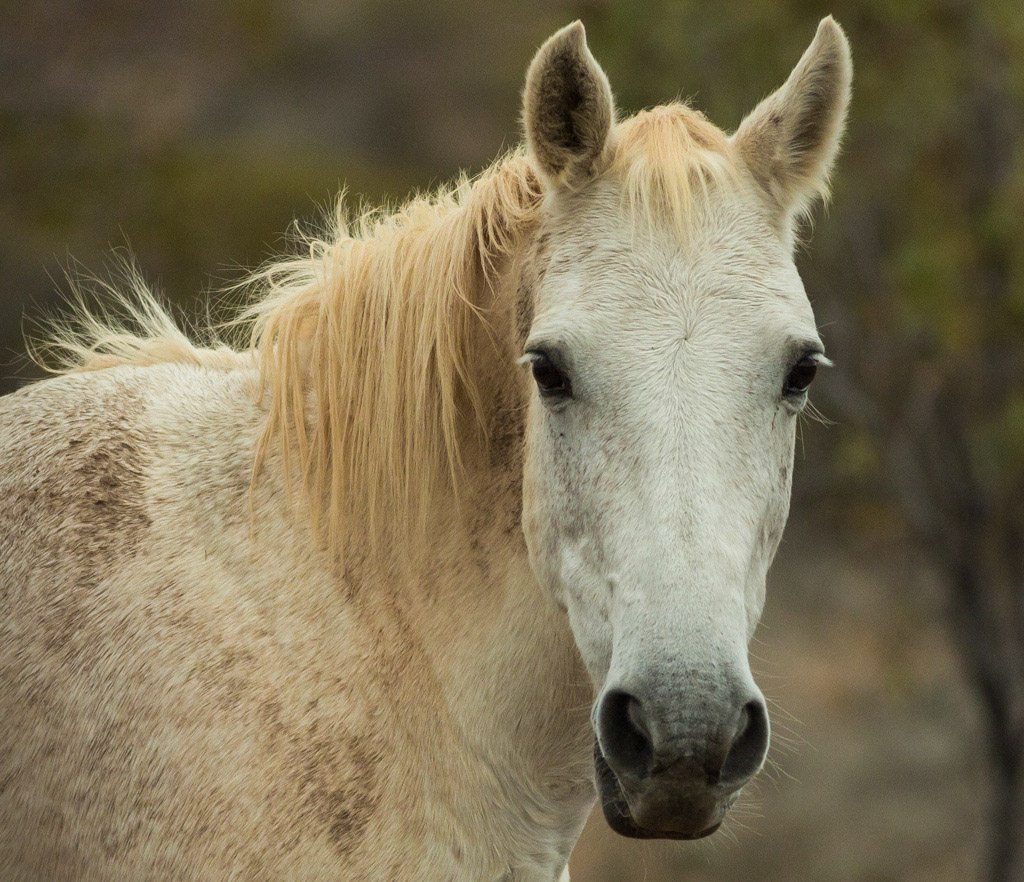 Wild white horses along the track into Arkaroola 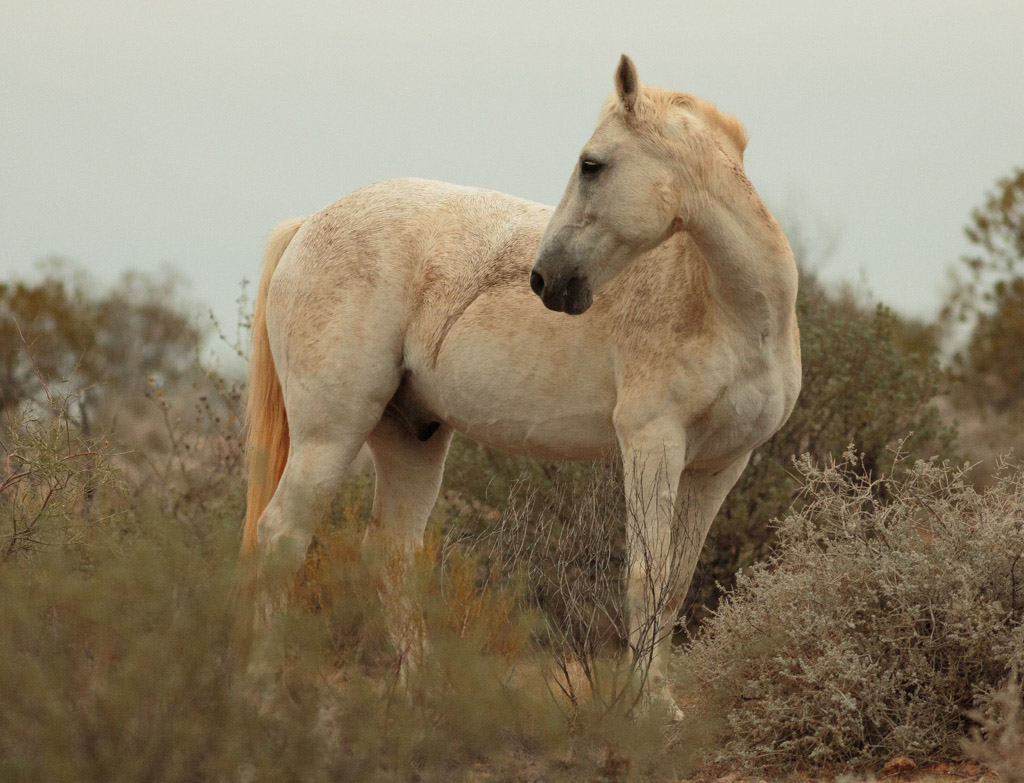 Early morning Drink. This guy was sharing a tiny, cereal bowl sized waterhole with half a dozen of his mates and a couple of noisy Galahs.

Lake Eyre rarely contains water, so hearing of rising levels and heavy flow in from the north, we decided to drive out and have a look. We plodded our way slowly out to Birdsville then headed south along the Birdsville track 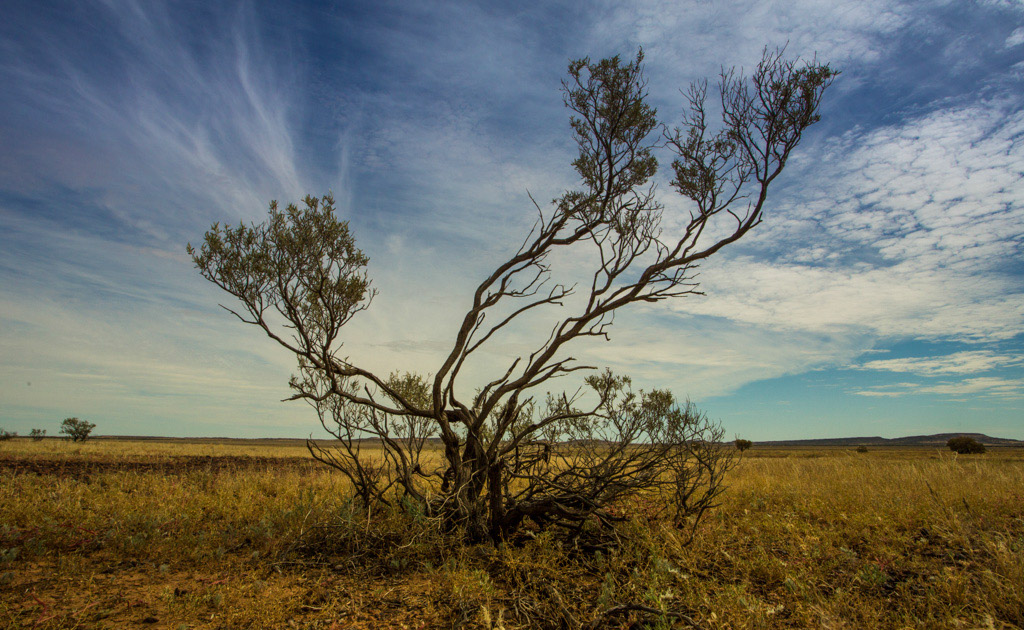 Vegetation in this area is sparse but interesting. Mostly Saltbush, Mulga and Desert Oak. 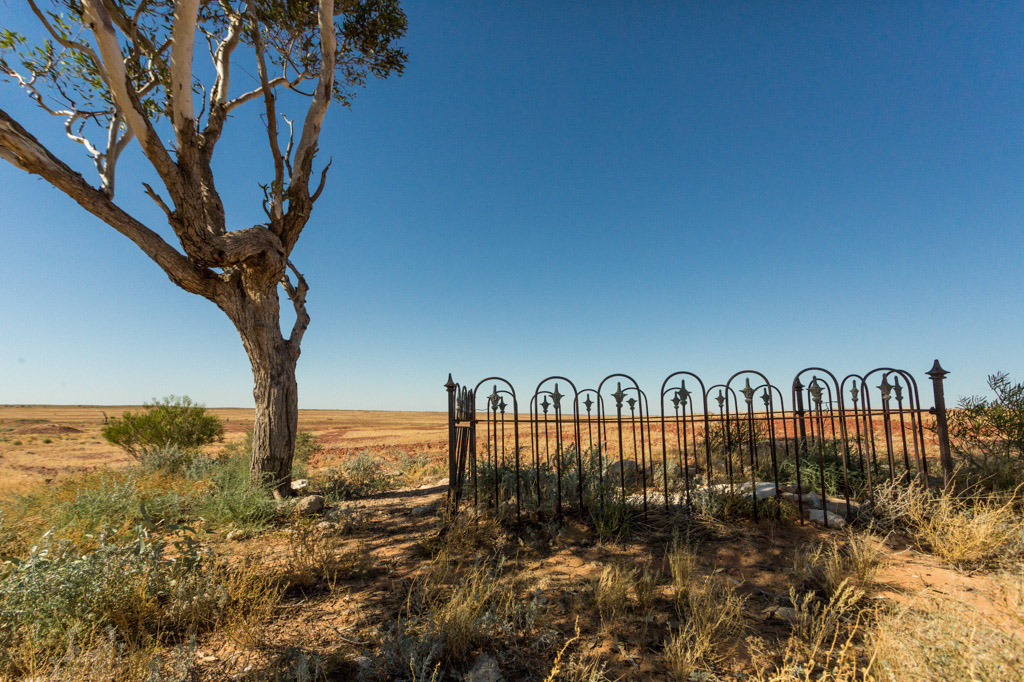 Early settlers along the Birdsville Track lived a hard life. This is the grave of the two youngest Scobie children who died of pneumonia in the 1890’s.

We called in to Etadunna Station and picked up a key and directions to one of the large lakes, already full of water, to the North of lake Eyre.

A slow trip through the sand dunes finally brought us out at a huge lake filled with water and surrounded by a crust of white salt. A strange sight in the middle of a desert.

There are some interesting old relics scattered along the Birdsville Track. I’d love to know the stories behind them.

We continued South to Maree – a sleepy little town with a Pub, “Yacht Club” and remnants of the old Ghan Railway Line. Maree marks the southern end of the Birdsville Track and is the best access point to Lake Eyre. We obtained maps and information from the Yacht Club and headed out to see the Lake.

Remnants of a railway siding and full moon.

We camped on a waterhole at Muloorina Station and drove out to Lake Eyre South, across the Goyder Channel and on to, a still dry, Lake Eyre North. It’s an amazing sight to see a brilliant white salt pan disappear over the horizon. As you walk out into the lake the sand dunes begin to disappear and all you can see is blue sky and white salt. 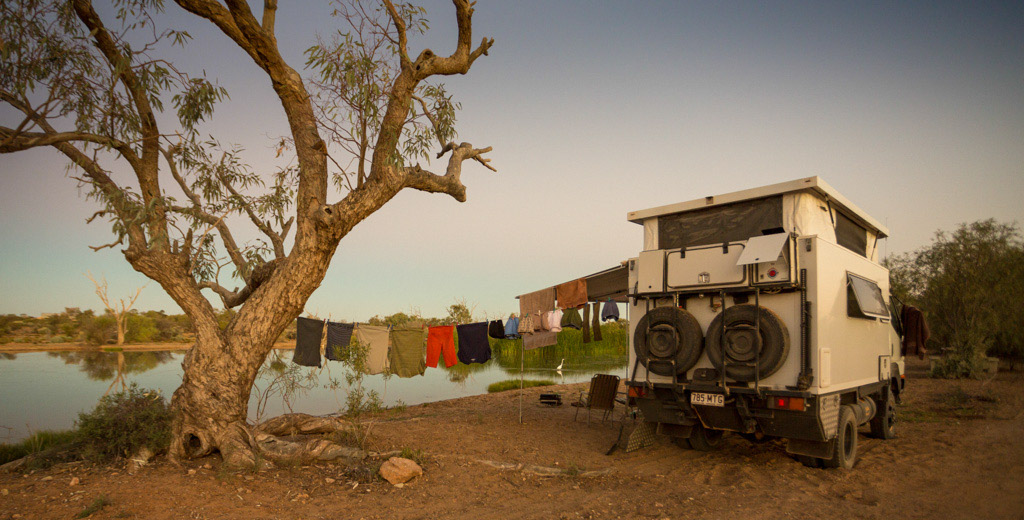 A couple of days at Muloorina waterhole gave us a chance to catch up on some washing and photograph some of the birdlife. 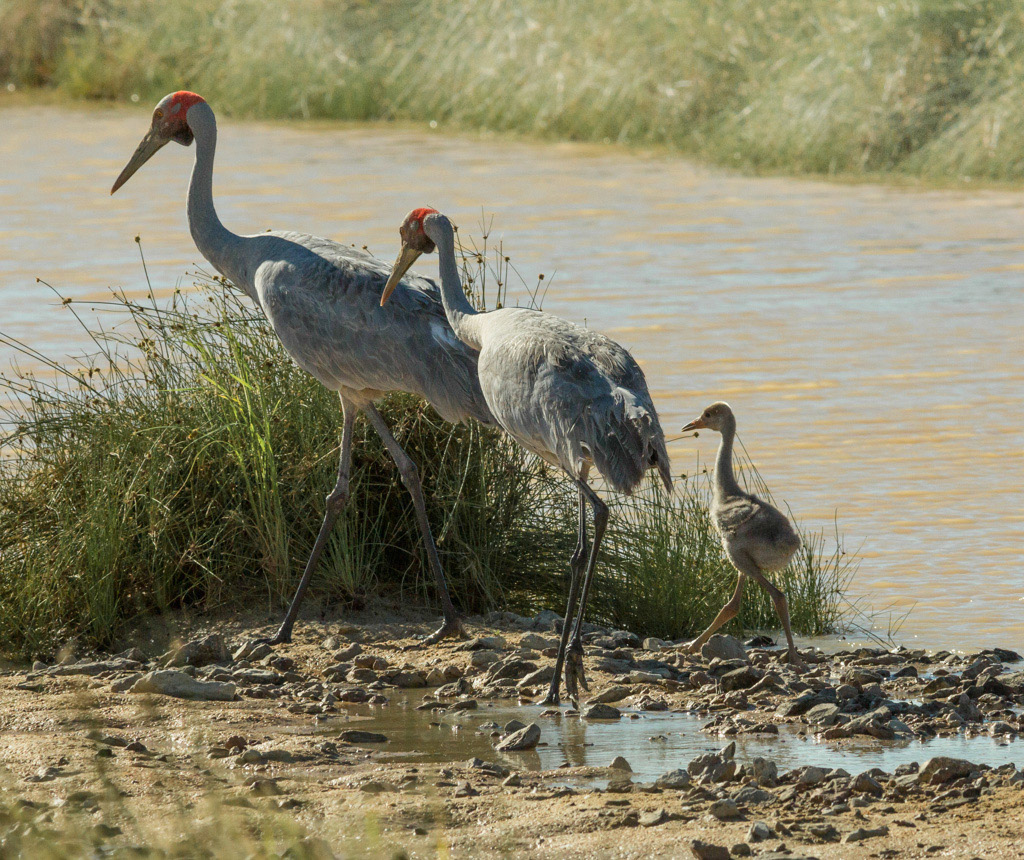 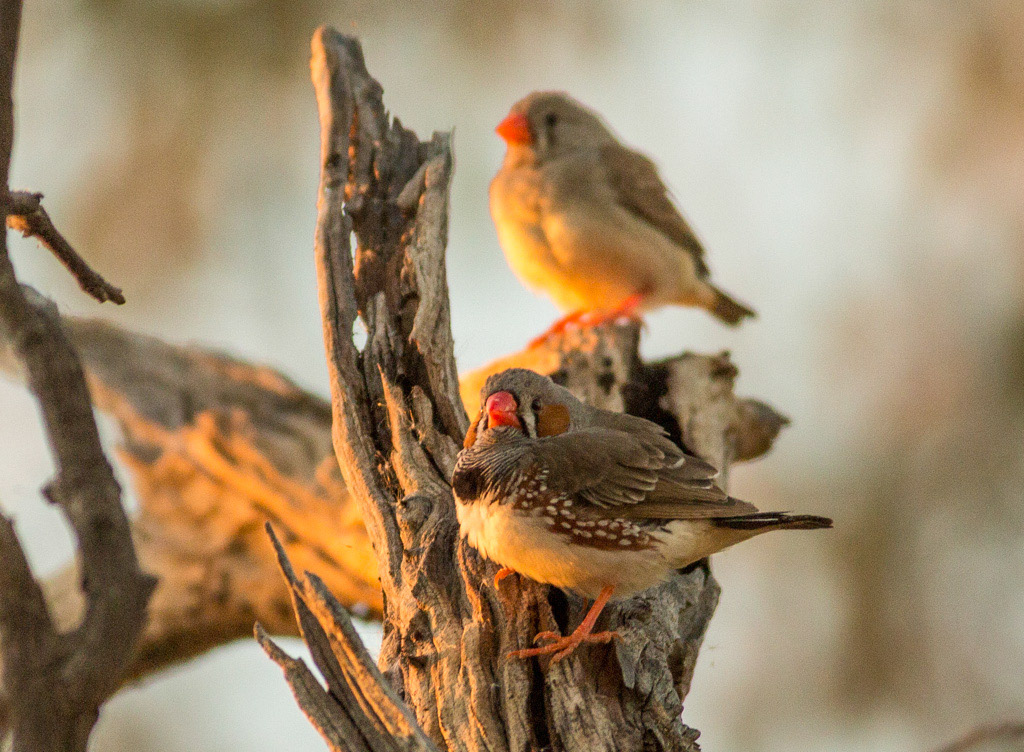 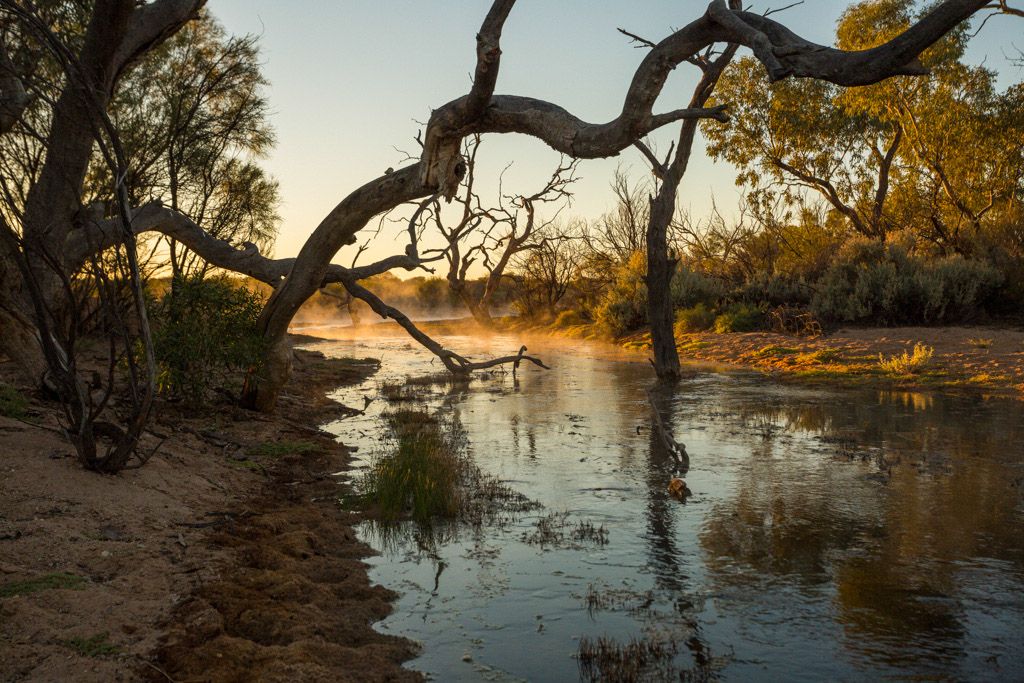 Muloorina waterhole is fed by an artesian bore. Boiling hot water bubbles up and creates a steamy mist early in the morning. By the time it reaches the waterhole it has cooled enough to support fish and yabbies.

Calling this a flock of corellas is probably an understatement. More like a swarm, descending on one little lonely house on the border of South Australia and New South Wales. The cleanup must be a nightmare!