New York is a bit of a shock after twenty four hours in transit. Everyone seemed to be on full throttle and we were barely idling. We caught a cab from JFK Airport to our apartment in the city.

We were lucky enough to be a couple of doors from an amazing bar called Mono Mono, where they play analogue music 24 hours a day from a collection of over 30,000 jazz LP’s. What a great place to get over a long flight. 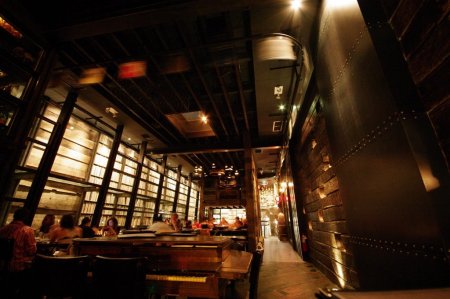 Mono Mono – the left hand wall is 12 shelves high, stacked with LP’s. A conveyor system circulates near 50 records at a time, around the ceiling and through the DJ’s booth, where an awesome sound is delivered through old valve amplifiers.

New York architecture is fantastic. Old brownstone buildings with external fire escapes and no elevators – no wonder there are a lot of skinny people in New York! Up and down six floors every time you want to go out would be hard work. 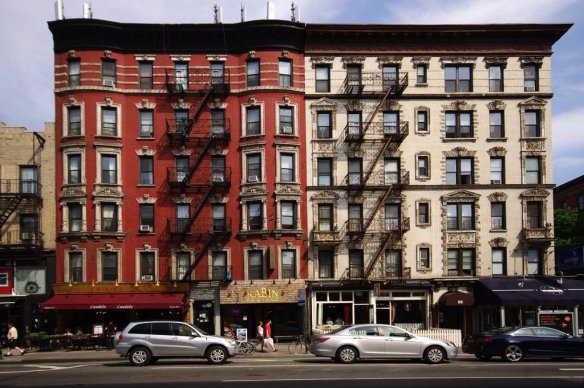 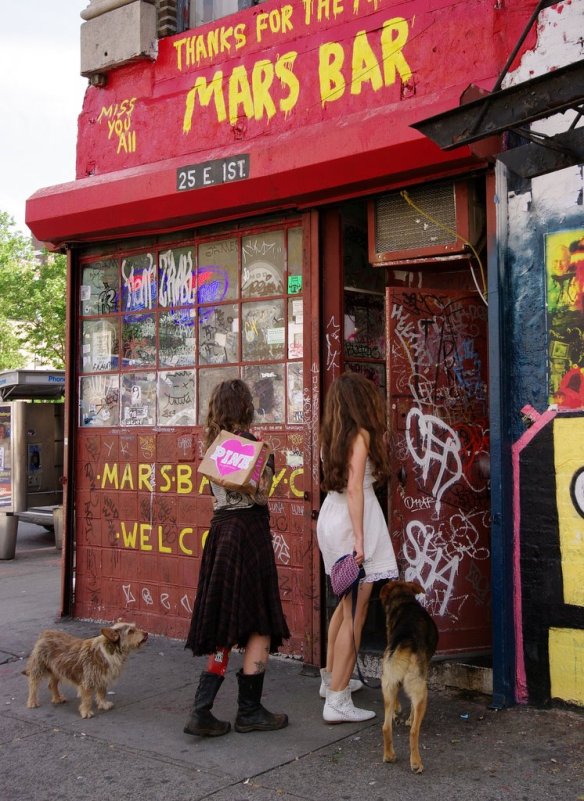 East Village,  has some mighty bars. We haven’t had a chance to visit this one yet, but it looks pretty interesting.

McSorleys Old Ale House is just around the corner from us. It is the longest continuously  running license in New York and inside looks as if it hasn’t changed since it was opened – sawdust covered floor, old wooden refrigerator and a collection of dust covered photographs and junk accumulated over the past 150 years. All they sell is their own ale – dark or light, and for some reason when you order one they give you two. No wonder they have been operating for 150 years.

Tucked down some of the side streets are some interesting shops. Trash and Vaudeville sold some bizarre fashions,  or they would be bizarre in any other city, but in New York nothing really seems bizarre. 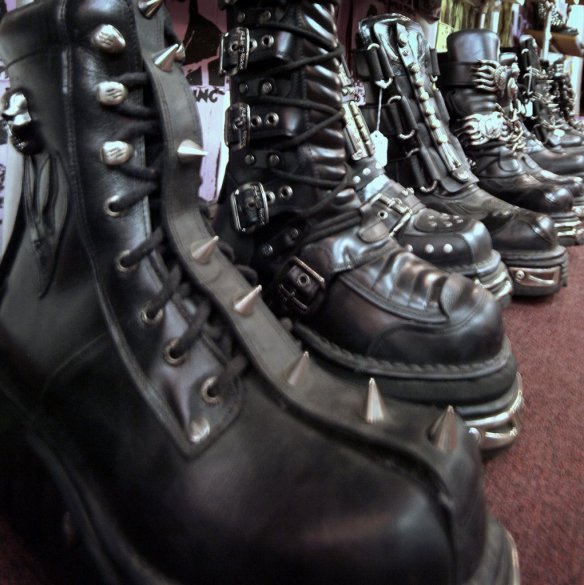 In New York there is not a lot of car parking space so they stack them neatly,  one on top of the other. 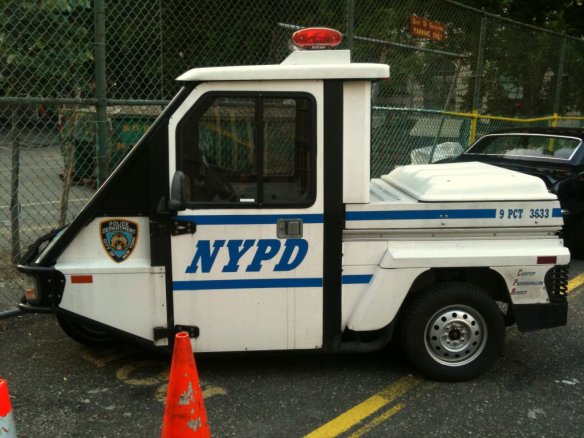 Even the police cars are down sized so they can fit more on the streets. 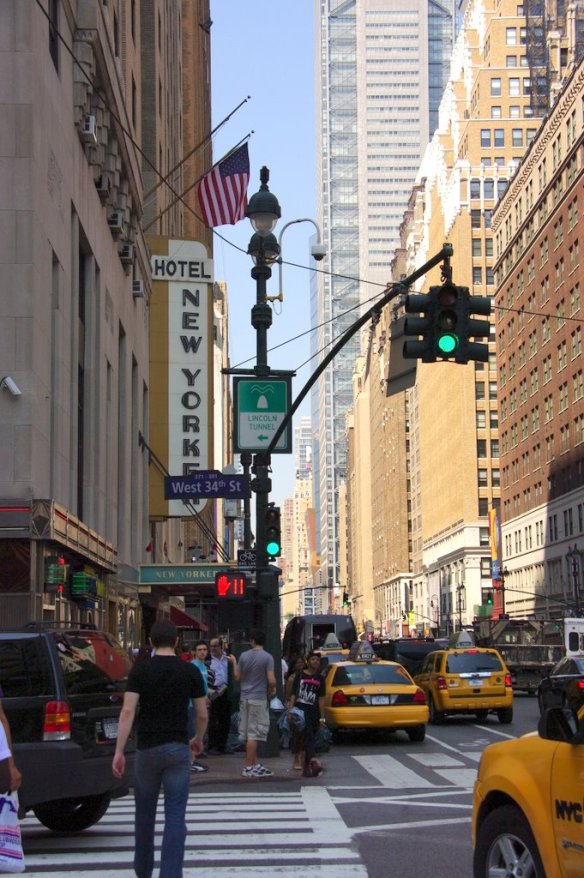 The huge orange billboard in the center of the photo above (detail below) gives a constant readout of the number of tons of greenhouse gas in the atmosphere. Its a pretty scary number especially when most people see it across the hood of a V8. 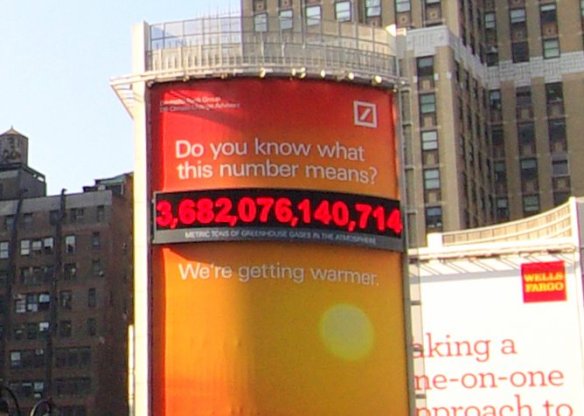 Maybe the billboard will change that? New York has a large fleet of hybrid Ford taxis.

If you dont want to drive, New York has to be one of the easiest cities to get around. The subway system is great, public transport is cheap, the streets are laid out in a logical grid and there are taxis everywhere.

It’s also flat and networked with bike paths, so riding a bike is a popular mode of transport. 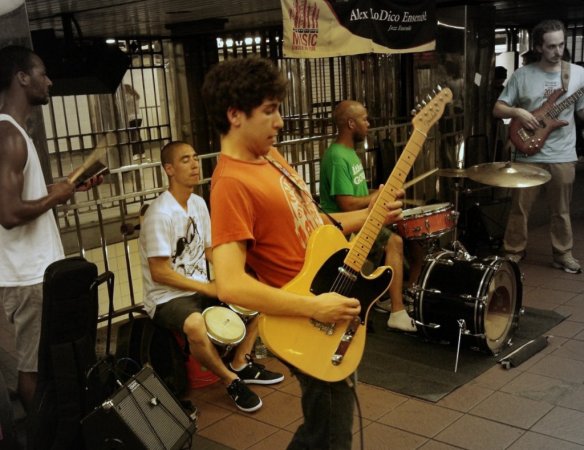 We stopped to listen to this band in Penn Station. They were great, so I bought two of their CD’s. When we got back to our apartment I discovered one of the CD’s was made in 1998 – back when the guy playing guitar was just a little kid! Just shows, you shouldn’t get caught up in the excitement of the moment when you are visiting New York. 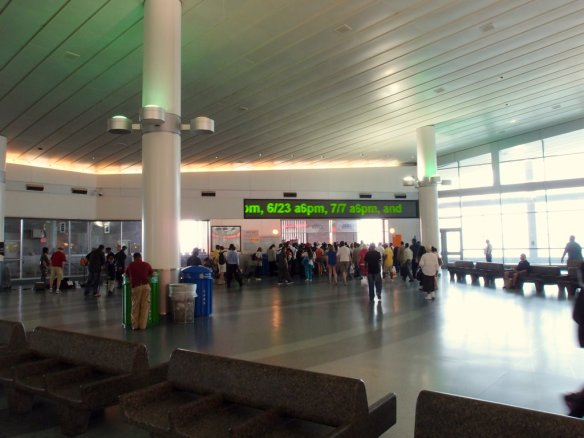 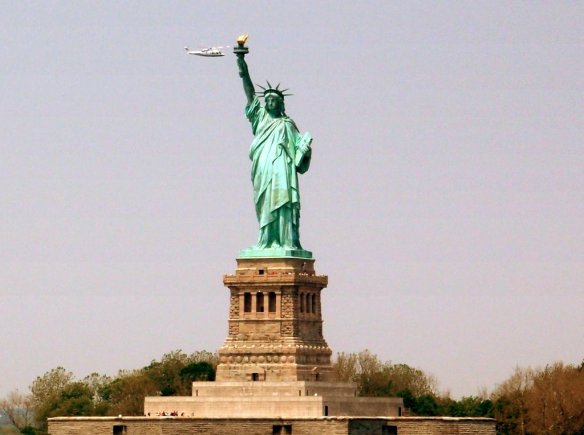 Statue of Liberty and Helicopter 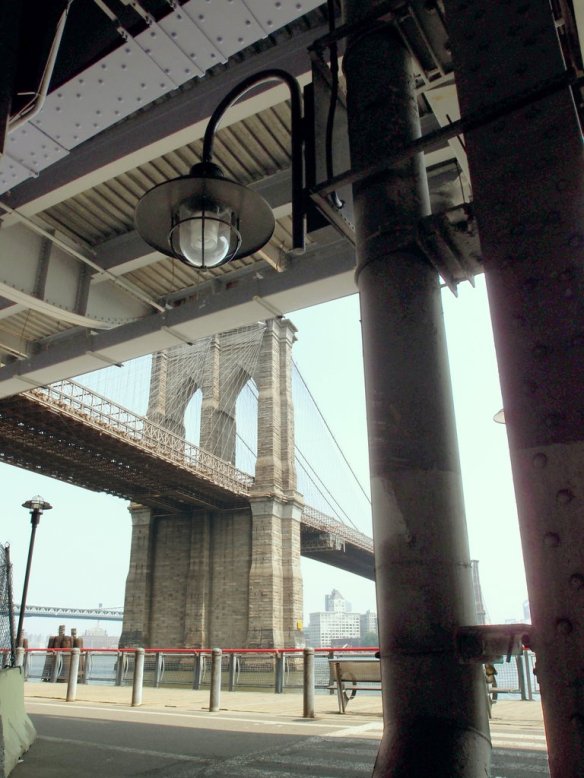