This, now defunct, little abattoir within Kakadu National Park was the catalyst for a huge change in the Australian Union movement. In 1985, the Australasian Meat Industry Employees Union were forced to pay 1.5 million dollars to the owners of  Mudginberri Meatworks to compensate  for costs and lost earnings due to Union picket lines halting production.

This led the ACTU to call three National strikes. The press turned the  AMIEU into public enemy number one. Ian Mclachlan, (president of the National Farmers Federation) said at the time that Mudginberri  “changed the nature of industrial relations in Australia”

The Barrister acting for Mudginberri at the time was Peter Costello.

So, this little slaughterhouse was the beginning of the end of union power in Australia. It’s demise was brought about by the refusal of meat inspectors to cross the picket line. In a sense, the meatworks became the sacrificial lamb to cripple  union power

Feral water buffalo entered through a door at one end of this room and exited frozen and packed in small cardboard boxes at the other end. 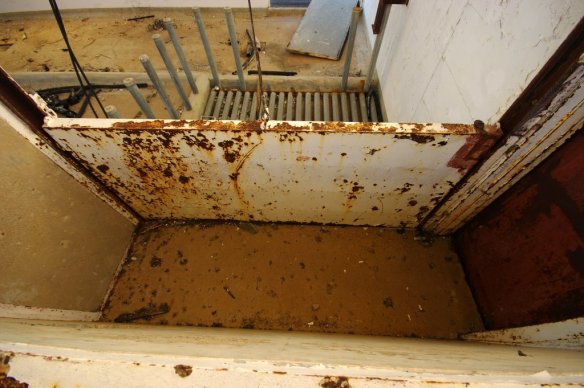 The Buffalo would enter through the door, lower right and be dispatched by the slaughter-man. The white steel petition would be lifted and the carcass hoisted from the grate beyond, to be conveyed through the processing room

25 years after the demise of Mudginberri, a pile of buffalo horns lie beaten and bleaching in the sun where a picket line once stood.